On February 7, 2021 at 0430 hours the FVFAC along with Harford County Department of Emergency Services Special Operations Team were dispatched for a reported Large Animal Rescue in the 2200 block of Rutledge Road, in Upper Crossroads.  FVFAC units initially responding included Rescue 1351 , Truck 1331 , Medic 1392 and Deputy Chief 13. While en route to the location Fire Dispatch advised units that the homeowner advised the horse had fallen into the pool, which the homeowner advised responders was approximately ten to twelve feet deep and  located to the rear of residence. On arrival of Deputy Chief 13 it was confirmed that the horse was in the deep end of the pool at the location and unable to self extricate. Due to the water temperature and hypothermia the horse at this time was losing energy in it’s efforts to keep it’s head above water.
As Fire & EMS personnel arrived on scene they immediately began preparing for Special Operations by deploying ropes and rigging along with setting up areawide lighting for the safety of personnel. FVFAC Brush Units 1341 & 1342 were also requested to respond for winching capabilities and if needed to draft from the pool to lower the water level.
DES Special Operations Team members arrived and they were implemented into the operation for their tactical training and abilities.  During the operation the following functional NIMS (National Incident Management System) positions were assigned:
Incident Command – Deputy Chief 13 McKinney
Safety – Lt. Brush (FVFAC)
Operations – Car 3 – DES Special Ops (Brunicke)
Logistics – Assistant Chief 13-2 Gail
Rescue Group- Lt. Edwards (FVFAC)
Staging – Captain Zamerski (FVFAC)
Chaplain – Chaplain 13 Hayden
Medical & Rehab – EMS Captain Steininger (FVFAC)
By 0453 hours it was sadly determined that despite efforts to this point, the horse was deceased. Fire/Rescue and DES Special Operations personnel then prepared for a recovery mission. DES Special Operations deployed two water techs into the pool water to safely secure appropriate harnesses to the horse. FVFAC Brush Unit 1341 was utilized to winch the horse carefully from the water, where a veterinarian requested to respond to the scene assessed the horse and confirmed the outcome.
At this point all crews on scene entered Rehab and then began securing equipment and the scene. The last units returned to service at approximately 0630 hours.
While tragic, this incident was mitigated promptly and with no further injuries or harm to responders or others on the scene. These outcomes can be traced to two main reasons. The use of the NIMS to manage the scene and the incident, and the ability to have the DES Special Operations Team on site to support and integrate with the FVFAC.
The Harford County DES Special Operations Team provides services which include:
Hazardous Materials Response
Advanced Technical Rescue (confined space, high angle, etc)
Swift Water and Open Water Rescue
Large Animal Rescue and Recovery
The DES Special Operations Team trains on these disciplines and more, and they respond to assist and support the Volunteer Fire Companies throughout Harford County. As with the Harford County Volunteer Fire Companies, the DES Special Ops Team also responds through Mutual Aid Agreements with surrounding counties and throughout the Baltimore Metro Region.
The FVFAC is fortunate to have several members of the DES Special Operations Team as community residents and FVFAC members giving us the ability to have these folks nearby 24/7.
When managing an expanding multi-agency, multi-jurisdictional incident our knowledge of and familiarity with the National Incident Management System is of paramount importance for scene safety and orderly scene management. FVFAC Officers and Members use the NIMS on every emergency response as well as during planned non-emergency events. At any significant gathering that the FVFAC plans on site or in the community there is an Incident Action Plan (IAP) developed specifically to address the known and potential hazards, etc. that may be encountered. Our “Junior” officers are routinely motivated by FVFAC Leadership to fill various roles within the Command structure on these planned incidents so that when needed, such as at 0430 hours this morning, they are familiar with the Incident Command Structure and the challenges faced based on the role assigned. 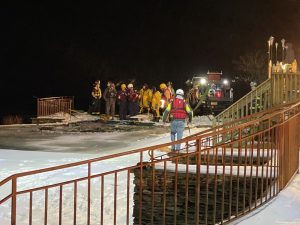 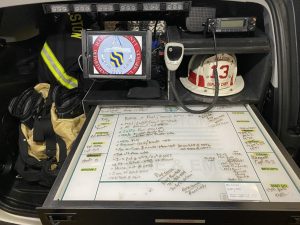 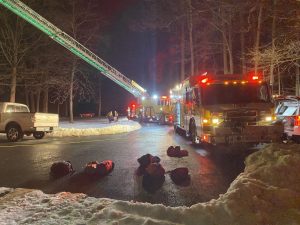 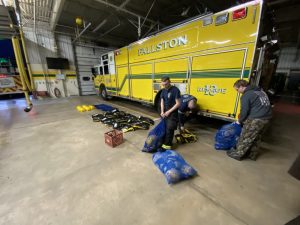 If you would like further information on the Harford County DES Special Ops Team you may use this link to their site…
https://www.harfordcountymd.gov/2201/Special-Operations
For more info on NIMS and Managing the Incident follow  this link….
https://www.fema.gov/pdf/emergency/nims/nimsfaqs.pdf
photo credit FVFAC

FVFAC on scene at YBES 1901 Fallston Rd for a fire alarm activation.
1300 hours....School staff advising a CO (carbon monoxide) alarm activation. The school has been evacuated while FVFAC personnel are investigating.

1330 hours....FVFAC and School Facility Staff determined that the CO alarm activation is due to a boiler malfunction.
No injuries or need for EMS at this time.

1345 hours.....FVFAC personnel are continuing to perform air monitoring throughout the school building with no detection of a hazard at this time. Students have been temporarily relocated to the Fallston Senior Center next door.

1400 hours......FVFAC personnel are clearing, turning the building over to HCPS and YBES staff. No hazards found at this time related to CO. ... See MoreSee Less

What is “CO” alarm activation???

Are the kids ok?

Thank you Fallston Volunteer Fire and Ambulance Co. for keeping our kids safe!

Thank you! No one seemed to know what was happening🙄

Our next winter weather event is forecast to begin Sunday afternoon and continue overnight.....

Winter Storm Watch is in effect.....
Starting as Snow in our area Sunday afternoon - the cold air is in place! Temps will be very cold today and tonight
Still some storm track uncertainty. Mix along I95 Corridor. Southern portion of county could see more rain as storm transitions; northern half of county will see a later transition to mix precip sometime between 1800 to 2100
After .....Snow will be a mixed bag of precip of freezing rain sleet, snow. Possible glazing of ice as there is an increased threat of ice
Winds will start to increase Sunday evening

Stop by our Carrs Mill Station and support the Harford County Local Super Plungers for Special Olympics!!! The last plunge is at 3 p.m. but the food and drink vendors, Rob Fahey, and raffles continue until 5 p.m.

As we get through the winter season...PLEASE remember to always be fire safe!

Remember: Electric and other space heaters need space! Keep them at least 3 feet away from anything that can burn....upholstered or wood furniture, magazines and papers, clothes, bedding, and most of all----YOU !.
And never plug a space heater into an extension cord or multi outlet strip. Only connect them to a wall outlet of a properly rated circuit. ... See MoreSee Less

FVFAC Engines 1311 and 1312 responded on the second alarm assignment to this dwelling fire in Jarrettsville. Please follow the OSFM social media for any updates. ... See MoreSee Less

Ugh this poor family. Thankfully no one was injured

sending lots of prayers to that family

If anyone knows of anyone taking up donations, please let me know