As many families in the greater Fallston and surrounding areas were preparing for their evening activities Wednesday May 29, 2019….dinner, youth sports, and high school graduation events….the weather dealt a blow to the region that caused damage, disruptions, and delays for many.  Just after 5:30 P.M., the National Weather Service issued a Severe Thunderstorm Warning for Harford County and surrounding areas. As the storms approached the area, Harford County Department of Emergency Services (DES) fire dispatchers alerted all Harford County Volunteer Fire and EMS Companies to provide increased staffing at the fire stations and repeated the warnings issued by NWS.
Shortly after 6 P.M. calls were dispatched for wires down and arcing in the 2500 block of Greene Road, along Fallston Road between MD 165 and Pleasantville RD. and at locations on Pleasantville Rd. The Fallston Volunteer Fire and Ambulance Co. initially responded to these calls with 2 Brush Units (1 from each station) and Engine 1312. On arrival at the Greene Road call FVFAC personnel encountered wires down, malfunctioning electrical transformers, and more….. 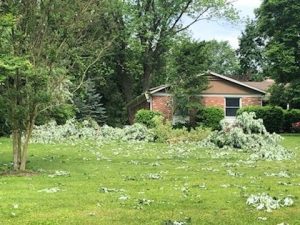 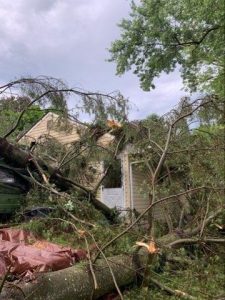 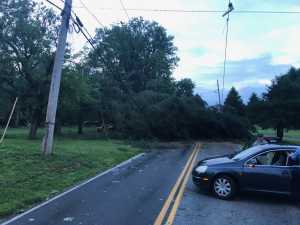 A sudden, undetermined, weather event had caused numerous trees, poles, and wires to come down in the street, in yards, and onto homes in the neighborhood.  Other fixtures, furnishings, and property had been displaced, damaged, or destroyed. FVFAC Assistant Chief Dan McKinney, the Incident Commander (IC), per the National Incident Management protocols, established “Greene Rd. Command” and directed FVFAC on scene personnel to identify the hazards present in the community and begin an assessment of the immediate needs of the residents there. Other FVFAC personnel assembled at the FVFAC Carrs Mill Road Station to support the functions of our members on the Greene Rd incident and to respond to other emergency calls in and around Fallston through the evening. Agencies requested and responding to the Greene Rd incident through the IC included Harford County Sheriffs Office for scene security and traffic control, FVFAC Fire Police for traffic control, BGE for utility shut off and repairs, Harford County Building Inspector to determine the structural stability of damaged homes, Harford County DES for damage assessments and operational support, Harford County DPW for roadway clearing and debris removal among others. The IC and DES personnel were in contact with Maryland Emergency Management Agency (MEMA) and NWS within minutes of the event to determine if additional support would be required and to begin investigating the type of event which had occurred. Fortunately no injuries were reported from this event to citizens or responding emergency personnel.
As the cleanup continued in the area on Thursday, May 30, 2019 staff from the National Weather Service Baltimore/Washington Weather Forecast Office completed storm surveys in portions of the northern Baltimore Metropolitan Area affected by the weather events occurring on Wednesday afternoon, May 29, 2019 including the Fallston and Baldwin communities. The following is taken from the NWS information release ……
“The Fallston and Baldwin area of west-central Harford County was impacted by a macroburst, which produced damaging wind gusts
estimated at 80-90 MPH. A macroburst is defined by Fujita (University of Chicago, 1985) as a large down-burst with winds extending in excess of 2.5 miles long. A concentrated area of damage was observed starting at Moores Road in Baldwin, extending discontinuously for approximately 3.25 miles to the east, ending at Pleasantville Road in Fallston. In this area, numerous observations of tree damage were observed. The tree damage included mainly large limbs of hardwood trees and snaps of about a dozen pine trees. Several single family homes were impacted with limbs falling onto rooftops. All tree damage fell in an easterly direction, with eyewitness time estimates of occurrence between 600-615 PM. An image circulating among residents showed what appears to be a roll cloud, representing the leading edge of the gusty winds. Frequently, roll clouds are mistakenly identified as a funnel cloud or a tornado, but they lack the laminar, streamlined condensation cloud of a funnel cloud which would be attached to the cumulus cloud base. Storm Relative Velocity at the 0.5 degree elevation angle from the FAA`s Terminal Doppler Weather Radar at BWI Thurgood International Airport clearly shows a divergent pattern at 610 PM across the region, indicative of a down-burst wind field, which coincides with time estimates by eyewitnesses.
The other region of the northern Baltimore Metropolitan area that was adversely impacted by Wednesday afternoon`s severe storms was
the White Marsh region of eastern Baltimore County. This area was also impacted with a macro-burst, which caused straight-line wind
damage. Two wooden telephone poles were snapped along Silver Spring Road, and numerous trees and branches were downed along Saxon Circle. All observed tree damage fell to the northeast. Additionally, the Baltimore County Office of Homeland Security and
Emergency Management reported the easternmost wind damage in Middle River, near the intersection of Ebenezer and Bird River
Roads. The western most damage reported was near the intersection of Yvonne Ave and Silver Spring Rd in Nottingham. There were
approximately 18 instances of tree damage between these two locations, with the horizontal distance of about 4 miles. The
FAA`s Terminal Doppler Weather Radar at BWI Thurgood International Airport clearly shows a 0.5 degree elevation angle radial
velocity down-burst/divergent wind pattern at 5:55 PM. The snapping of the telephone poles and nature of the reported and observed
tree damage produces an estimate of 80-90 MPH wind.
The National Weather Service Baltimore/Washington Weather Forecast Office would like to thank the Harford County Department of Emergency Services and the Baltimore County Office of Homeland Security and Emergency Management for their assistance in the storm surveys.”
The FVFAC continued to respond to emergency calls on Thursday May 30, 2019 directly related to the macro burst including a dwelling fire believed to be the result of unattended electrical appliances being re-energized, pole fires, and wires arcing as electric power was restored to neighborhoods. 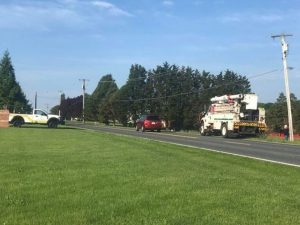 photos courtesy of FVFAC personnel
The FVFAC would like to take this opportunity to say THANKS! to all the agencies that we worked with over the past 24-72 hours to address the needs of our community!!
Please also follow our Facebook page for timely information and updates.

Update.....1515 hours.....Units are clearing the scene, patient being evaluated by Kingsville VFC EMS.

FVFAC and Baltimore County units are responding to Harford RD at the Little Gunpowder River trail (county line) for a medical emergency on the trail. Please use caution in this area and expect traffic delays, lane closures. ... See MoreSee Less

Today is forecast to be the hottest day of the weekend, with many
locations reaching the mid-90s and heat indices approaching 100.
Many locations will once again reach the 90s on Sunday.

The abrupt beginning of hot temperatures early in the season after
a relatively cool spring brings an increased risk of heat
illnesses unless proper precautions are taken for those working
or recreating outdoors.

Since many outdoor events are planned this weekend in the region,
be aware of the heat, and take extra precautions if you work or
spend time outside this weekend. Reschedule strenuous activities
to early morning or evening. Plan to wear lightweight and loose
fitting clothing, and seek shade from the sun. Schedule frequent
rest breaks in shaded or air conditioned environments and stay
hydrated with non-alcoholic beverages.

WEATHER ADVISORY..!!!! FRIDAY AFTERNOON/EVENING
A TORNADO WATCH has been issued for our area until 1900 hours (7 p.m.) this evening.

Thunderstorms are increasing over western Pennsylvania. This activity will track rapidly eastward across the watch area today, posing a risk of damaging winds and a few tornadoes.

A Tornado Watch means conditions are favorable for tornadoes and severe thunderstorms in and close to the watch area.

As we continue to observe EMS Week 2022, which falls within National Trauma Awareness Month, two of our EMS providers were honored at the Johns Hopkins Bayview Medical Center (JHBMC) Trauma Survivor Day earlier this week.

EMS Captain Ed “Chip” Steininger Jr. (far left) and EMT Autumn Pafel (far right) responded to a MVC in December as the second due EMS unit. They immediately were assigned to a patient who they assessed, began to provide definitive pre-hospital care, packaged for transport, and determined that with the injuries presented transport to a local trauma center was the best course of action for their patient. As they transported their patient EMT Pafel contacted JHBMC via radio and discussed with the trauma staff the condition of their patient and provided pertinent information to insure a timely and appropriate transfer of care to the trauma center staff upon their arrival at JHBMC.

Our EMS providers, the JHBMC trauma team, and the statewide EMS system provided the best chance for these patients to have a positive outcome even on what is likely the worst day of their lives.

The Officers and Members of the FVFAC would like to take this opportunity to thank the JHBMC staff for recognizing our EMS members, and to say A JOB WELL DONE!!! to Chip and Autumn!!May is National Trauma Awareness Month.
In honor of Trauma Survivor Day today we celebrated one of Johns Hopkins Bayview's Trauma survivors who was involved in an MVC back in December. Here she is pictured with the medic crew who brought her to us that night and her fiance who was also involved in the accident and was transported to The Johns Hopkins Hospital that night. Both are doing so well in their recovery! Thank you to our EMS crew for joining us today! ... See MoreSee Less

Well.....it appears that spring, and summer may actually be here.

The National Weather Service has posted the following Special Weather Statement for our area for Friday, Saturday, and Sunday....

"Temperatures will rise into the 90s Friday, Saturday, and Sunday
for the first time since last Autumn. Friday will be the first 90
degree day in the Baltimore and Washington Metropolitan Areas
since last September. Saturday is forecast to be the hottest day
of the weekend, with many locations reaching the mid-90s and heat indices approaching 100. This level of heat will continue through Sunday.

The abrupt beginning of hot temperatures early in the season after
a relatively cool spring brings an increased risk of heat
illnesses unless proper precautions are taken for those working
or recreating outdoors.

Since many outdoor events are planned this weekend in the region,
be aware of the heat, and take extra precautions if you work or
spend time outside this weekend. Reschedule strenuous activities
to early morning or evening. Plan to wear lightweight and loose
fitting clothing, and seek shade from the sun. Schedule frequent
rest breaks in shaded or air conditioned environments and stay
hydrated with non-alcoholic beverages."